Basic Working Principle of A Thermal Power Station And its Typical Components.

10 Difference between Bolt And Screw

A simplified layout of a thermal power station is shown below. 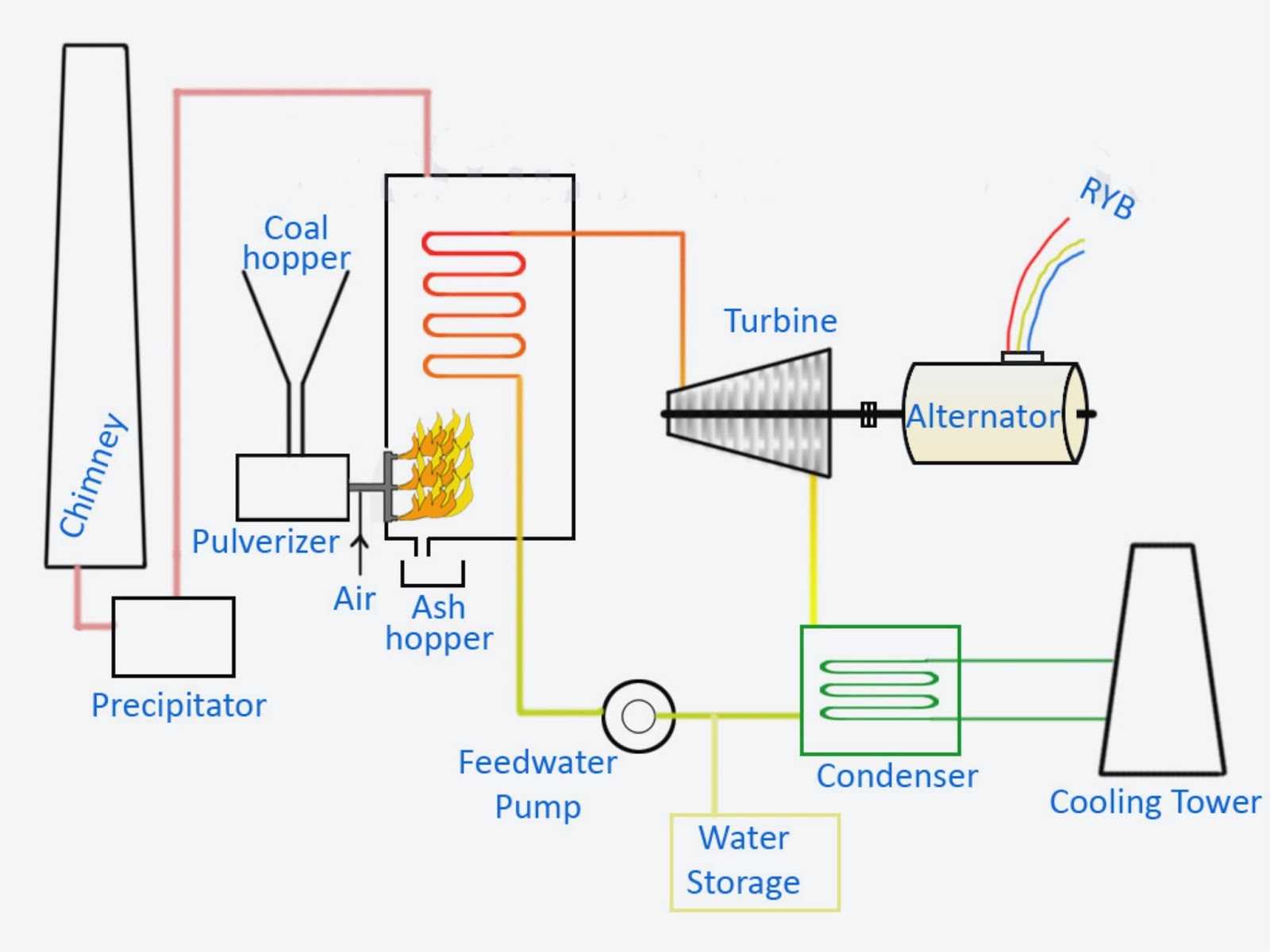 Coal: In a coal based thermal power plant, coal is transported from coal mines to the generating station.Bituminous coal or brown coal is used as fuel. The coal is stored in either ‘dead storage’ or in ‘live storage’.

Dead storage is generally 40 days backup coal storage which is used when coal supply is unavailable. Live storage is a raw coal bunker in the boiler house.

The coal is cleaned in a magnetic cleaner to filter out if any iron particles are present which may cause wear and tear in the equipment. The coal from live storage is first crushed in small particles and then taken into pulverizer to make it in powdered form.

Boiler: The mixture of pulverized coal and air (usually preheated air) is taken into the boiler and then burnt in the combustion zone. On ignition of the fuel, a large fireball is formed at the center of the boiler and a large amount of heat energy is radiated from it. The heat energy is utilized to convert the water into steam at high temperature and pressure. Steel tubes run along the boiler walls in which water is converted to steam. The flue gases from the boiler make their way through superheater, economizer, air preheater and finally get exhausted to the atmosphere from the chimney.

Economizer: An economizer is essentially a feed water heater which heats the water before supplying to the boiler.

Air pre-heater: The primary air fan takes air from the atmosphere and it is then warmed in the air pre-heater. Pre-heated air is injected with coal in the boiler. The advantage of pre-heating the air is that it improves the coal combustion.

Condenser: The exhausted steam is condensed in the condenser by means of cold water circulation. Here, the steam loses it’s pressure as well as temperature and it is converted back into the water. Condensing is essential because compressing a fluid which is in the gaseous state requires a huge amount of energy with respect to the energy required in compressing a liquid. Thus, condensing increases the efficiency of the cycle.

Alternator: The steam turbine is coupled to an alternator. When the turbine rotates the alternator, electrical energy is generated. This generated electrical voltage is then stepped up with the help of a transformer and then transmitted where it is to be utilized.

Feed water pump: The condensed water is again fed to the boiler by a feed water pump. Some water may be lost during the cycle, which is suitably supplied from an external water source.

This was the basic working principle of a thermal power station and its typical components.

SYNCHRONOUS MOTOR – WORKING PRINCIPLE, CONSTRUCTION, APPLICATION, AND WHY NOT SELF STARTING?
TYPES OF TRANSFORMER
TYPES OF PUMPS ON THE BASIS OF DIFFERENT FACTORS

What is Distributed Winding And Concentrated Winding?

Imagine a pen and a string. You start winding the string around the pen, and you continue…
Engineermind

In this article, we will discuss the difference between SI engine and CI engine. The spark Ignition (SI) engine,…
Engineermind

Ideal fluid A fluid, which is incompressible and having no viscosity, is known as an ideal fluid. Ideal…
Engineermind