Main Components Function And Working Of A Nuclear Power Plant

How Does A Nuclear Power Plant Work?

Heavy elements such as Uranium (U235) or Thorium (Th232) are subjected to nuclear fission reaction in a nuclear reactor. Due to fission, a large amount of heat energy is produced which is transferred to the reactor coolant. The coolant may be water, gas or a liquid metal. The heated coolant is made to flow through a heat exchanger where water is converted into high-temperature steam. The generated steam is then allowed to drive a steam turbine. The steam, after doing its work, is converted back into the water and recycled to the heat exchanger. The steam turbine is coupled to an alternator which generates electricity. The generated electrical voltage is then stepped up using a transformer for the purpose of long-distance transmission.
Basic Components And Layout Of Nuclear Power Station 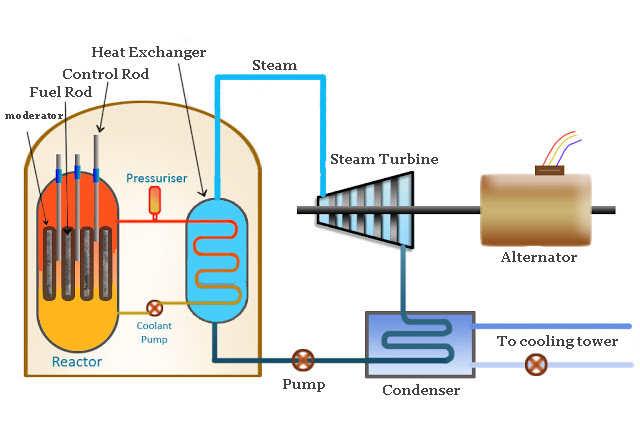 A nuclear reactor is a special apparatus used to perform nuclear fission. Since the nuclear fission is radioactive, the reactor is covered by a protective shield. Splitting up of nuclei of heavy atoms is called as nuclear fission, during which huge amount of energy is released. Nuclear fission is done by bombarding slow-moving neutrons on the nuclei of a heavy element. As the nuclei break up, it releases energy as well as more neutrons which further cause fission of neighboring atoms. Hence, it is a chain reaction and it must be controlled, otherwise, it may result in an explosion. A nuclear reactor consists of fuel rods, control rods, and moderator. A fuel rod contains small round fuel pallets (uranium pallets). Control rods are of cadmium which absorbs neutrons. They are inserted into a reactor and can be moved in or out to control the reaction. The moderator can be graphite rods or the coolant itself. Moderator slows down the neutrons before they bombard on the fuel rods.

The steam turbine rotates the shaft of an alternator thus generating electrical energy. The electrical output of the alternator is the delivered to a step up transformer to transfer it over distances.

The steam coming out of the turbine, after it has done its work, is then converted back into water in a condenser. The steam is cooled by passing it through a third cold water loop.

Birds Sit On The Distribution Line Only, Why Not On The Transmission Line?

Ever Thought, What actually happens when we switch the knob to reserve? A regular motorcycle Has main tank…
Engineermind